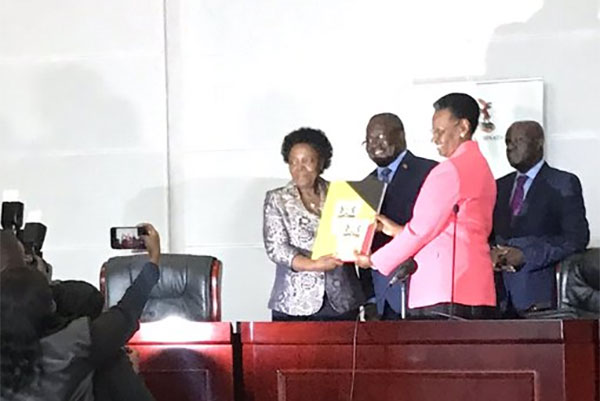 
92.2 per cent of the students who sat for last year’s Uganda Certificate of Examinations (UCE) passed and are eligible to proceed for advanced studies.

According to results released by the Uganda National Examinations Board (Uneb) at Office of the Prime Minister in Kampala, there has been registered improvement in UCE performance in 2019 (92.2 per cent) compared to 2018 (87.2 per cent).

The failure rate dropped significantly from 12.8 per cent to 7.8 per cent this year according to Uneb executive secretary Dan N. Odongo.

Biology (70 per cent), Geography (85.3 per cent), Agriculture (75 per cent), Chemistry (54.6 per cent) and Art (99.9 per cent) are the subjects which registered overall improvement in performance while English language, History, Physics and Commerce registered a significant drop.

“There is still a challenge in overall pass levels for Science subjects especially Physics and Chemistry, where nearly half of the candidates have not achieved the minimum Pass 8 level. Teachers are still not integrating the teaching of theory and practical. There is more theoretical approach to practical tasks due to lack of practice.” Odongo said

The minister of Education and Sports Janet Museveni was pleased with the improvement in performance especially at higher division levels as compared to the previous years.

“The lower failure rates mean less wastage as more learners are able to transit to the post UCE level of education. Areas of improvement have been pointed out by Uneb and I implore head teachers and teachers to make efforts to improve on those areas,” she said.

The minister however warned schools of the unfortunate development in the teaching process in schools now where the syllabus which is supposed to be taught in four year’s is compressed and taught in three years so that they remain with enough time for revision which she said has in turn made teachers to rush through the curriculum content and skip some topics.

The number of female candidates who registered for the 2019 UCE for the first time surpassed that of males by 398 even though the males continue to perform better than the females especially in Mathematics and Sciences with the females still dominating in the English language.

Ms Museveni said that the government is going to continue addressing factors such as unsafe school environment, early pregnancies and early marriages that impact negatively on girls’ retention in school.

A total of 410 Special Needs Education (SNE) candidates registered for the examinations in 2019 as compared to 357 in 2018 with 36 blind, 87 with low vision, 60 deaf, 26 with dyslexics and 78 physically handicapped. There were however other 123 other candidates with other forms of disability that only needed to be given extra time.

The Uneb examination centre at Luzira Prison for the inmates registered 49 candidates although it was 48 candidates who sat for the exams. Nine obtained Division two, 14 were in Division three, 23 passed in Division four and only two failed.

The number of withheld exams decreased from 1,825 in 2018 to 1,262 in 2019. The most common forms of malpractice included external assistance, collusion among candidates, impersonation and script substitution with Physics, Chemistry, Biology and Mathematics being the most affected subjects.

According to Odongo, the board cancelled 1,086 results of candidates who sat UCE in 2018 after hearing of the cases and released the rest. He further informed the hearing of the 2019 PLE withheld results will commence on Monday 3rd February.

Heads of UCE examination centres can download the results from the comfort of their offices but result lists are being issued at the Uneb offices at Ntinda or candidates can check for their results through mobile phones by typing UCE, leave a space, type in the full index number and send to 6600 on MTN and Airtel networks.

Ms Museveni announced that the selection exercise for senior five students will be conducted at UMA Show Ground, Multi-purpose hall between 13th and 14th February.