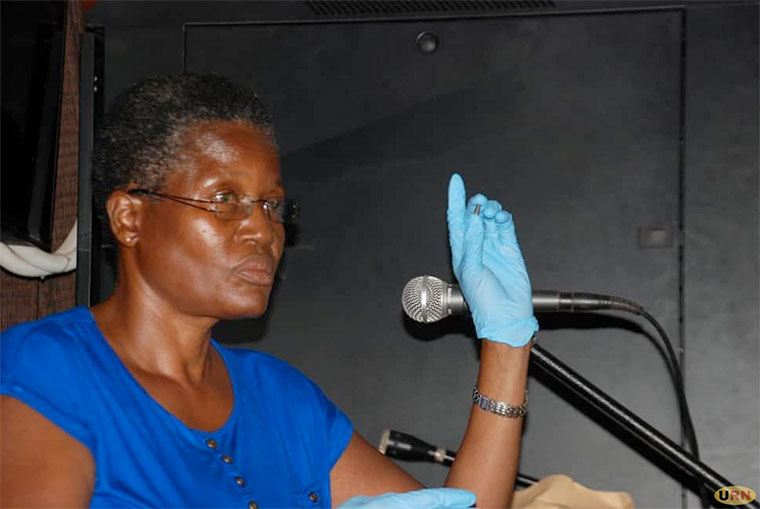 
The bullet that allegedly killed child rights activist Kenneth Akena has been displayed in court.

The round-nosed bullet was displayed before Justice Steven Mubiru on Thursday by principal government analyst Robinah Kirinya attached to the Directorate of Government Analytical Laboratory located in Wandegeya, Kampala.

Kirinya was testifying as prosecution witness number eleven in the case where the Quantum Logistics Limited director Matthew Kanyamunyu and his Burundian Girlfriend Cynthia Munangwari are accused of shooting dead Akena on November 12, 2016, in Lugogo in Nakawa Division.

Kirinya told court that she received two requests from police to examine and determine the calibre and the possible gun which was used to discharge a bullet that had been brought to her.

The other request was about examination of Akena and Kanyamunyu’s vehicles to ascertain whether there was contact between them and whether there were traces of gunshots on both vehicles.

She noted that she examined the bullet and found that it had a round nose and its ammunition calibre was 2.2 inches with a weight of 2.58 grams and its length was 1.2 centimetres.

According to the analyst, this kind of explanation means that the bullet had been discharged by a pistol or a revolver that has eight riflings in its barrel which twist to the right. Earlier, detective Constable Haruna Mugisha returned to court and was cross-examined by the defence lawyers Caleb Alaka, MacDusman Kabega and Evans Ochieng.

He was cross-examined on the role he played as the scene of crime officer as well as taking pictures of all the exhibits being used in this matter. Mugisha noted that the search was conducted in his absence of which the lawyers said it’s illegal.

Also, during this cross-examination, it emerged from Kanyamunyu’s lawyer, Kabega that he refused to provide his blood samples to Mugisha while at Luzira prison because he had earlier provided the same when he was still in police custody.