It’s a time to be responsible, South Africans 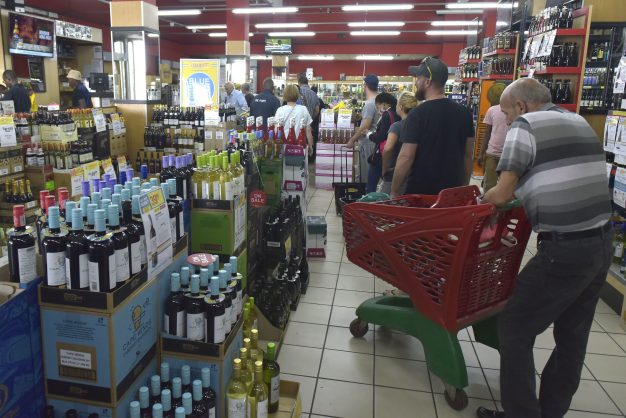 Queues at Liquor City in Edenglen, 26 March 2020 ahead of the 21-day lockdown to slow the spread of the Covid-19 virus. Picture: Neil McCartney

We have been drafted to fight in a war that will kill many if we do not toe the line, and rosaries and rosé wine are not the solution.

If yesterday’s selfish, everyone-for-themselves frenzy of panic buying is any- thing to go by, then the next 21 days – until the end of the coronavirus lockdown period is over – is going to be tough.

Last night, as the infection total soared towards 1,000, Cyril Ramaphosa pleaded with South Africans to spare two minutes to pray for our country. But yesterday, the queues outside bottle stores showed clearly that, for many of us, the higher power is booze.

Yet, it is going to take more than rosaries and rosé wine to help turn aside the path of the Covid-19 catastrophe. South Africans are going to have to take responsibility and change their often reckless behaviour.

So far, it appears as though appeals to our better nature from everybody from the president down have failed. Appeals for people to implement “social distancing” – by avoiding gathering in crowds and to stay two metres away from each other – appear to have fallen on deaf ears.

In yesterday’s panic buying, shops all over the country were swamped with people who seemed to care little that they were in the danger zone where transmission is most likely.

So, there can be no doubt the government was correct in implementing such harsh measures. And they are harsh: no one is to leave their house, even for exercise or, as the suburbanites now realise, to walk their dogs. You are only allowed outside if you are going to make basic food purchases, or to get urgent medical attention.

There is, however, a wide range of people who have been declared part of the country’s “essential services” … including the media, because we still provide more reliable information than the fearmongers on Twitter or Facebook.

Yesterday, many companies rushed to get their businesses recognised as essential services and then to get their workers issued with the necessary permits required under the Disaster Act regulations. These permits will have to be produced for police and SA National Defence Force road blocks, or their street patrols, if someone is out of their residence.

No doubt there will be a huge number of teething problems, which is to be expected in an undertaking the scale of which has never been seen. Yesterday, it became apparent that government departments were working together and that a huge amount of work has been done behind the scenes by civil servants – working closely with representatives of business – to identify and iron out potential problems.

It is a sad comment on the state of our country, though, that it took something like this deadly virus to get the ANC government finally coming together as an efficient administrative unit. Whether it all works will only be judged in the three weeks ahead of us, but the signs are encouraging.

If this lockdown is successful and we are able to be released from our effective house arrest on 16 April, then it will show that this government is capable of great things. That will be good and bad news for the ANC because, once people have seen what can be done, they are not going to be prepared to go back to the corruption and inefficiency of the past.

The opening lines in the classic novel by Charles Dickens, A Tale of Two Cities, resonate for SA today as we set forth on a road untravelled: “It was the best of times; it was the worst of times.”

In this worst of times, where personal freedom has been curtailed on an unprecedented scale, it can also be the best of times.

We are being drafted to fight in a war, a war against a virus which will kill hundreds of thousands of our fellow South Africans if we do not close ranks by opening our ranks and staying apart.

We won’t get medals for this campaign. We won’t get victory parades. We probably won’t even get to meet the grateful families of those whose lives we save.

But we will emerge from this trial stronger, and nicer, as human beings.