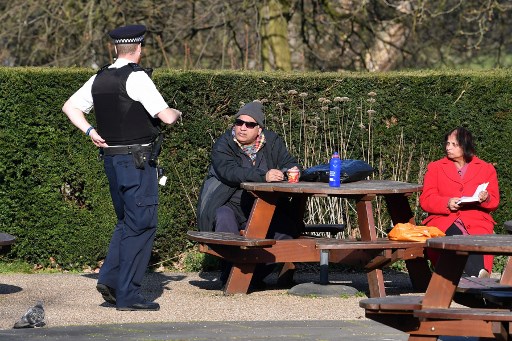 A police officer speaks to a couple sat at a bench in the sunshine in Greenwich Park in London on March 26, 2020 after the government ordered a lockdown to help stop the spread of the new coronavirus. Picture: Ben STANSALL / AFP

Frontline healthcare workers say a lack of personal protective equipment (PPE) as well as insufficient testing of staff for Covid-19 is putting them and patients at risk.

Hospital bosses and doctors on Thursday warned of being swamped with a “tsunami” of Covid-19 patients in London, as Britain braced for a peak in cases and the government faced calls to urgently provide specialist kit and tests for frontline health workers.

Scientists also warned thousands of new ventilators may come too late and Prime Minister Boris Johnson was criticised for not cooperating with European countries to boost capacity.

Britain initially adopted a light-touch approach to the outbreak but has since imposed tougher measures, including a three-week lockdown, as confirmed cases and deaths climbed.

According to the latest figures, 463 people have died from the virus and more than 9,500 people have been infected, with London accounting for about one-third of all cases.

The chief executive of NHS Providers, which represents the heads of hospital trusts in the state-run National Health Service, said there had been an “explosion of demand” in the capital.

Chris Hopson told BBC radio that hospital bosses said there had been “wave after wave after wave” of admissions of seriously ill patients, with numbers predicted to surge further in the next two weeks.

“The word that’s often used to me is a sort of continuous tsunami,” he added.

Official statistics are thought to represent only a fraction of the real number of infections across Britain, as only those taken to hospital with severe symptoms of Covid-19 are tested.

Johnson on Monday imposed a shut-down of non-essential shops and services, and banned gatherings of more than two people to cut close-contact transmission of the virus.

In a sign of an expected rise in cases, 500 beds will be available from next week in a new 4,000-bed field hospital set up at the giant ExCeL exhibition centre in east London.

The government is looking at creating 10 other centres around the country.

But despite urging people to stay at home, London Underground trains and platforms have been packed with people unable to work remotely, particularly non-contract construction workers.

London’s Mayor Sadiq Khan, whose powers include transport in the capital, has been urged to run more services but he has said that is impossible because of staff illness and shortages.

Public transport use was down 13 percent on Thursday, Khan said.

Britain has unveiled a raft of measures to help businesses and individuals as the economy slumps, with more expected on Thursday for the self-employed.

But frontline healthcare workers say a lack of personal protective equipment (PPE) as well as insufficient testing of staff for Covid-19 is putting them and patients at risk.

“If hospitals are to survive this, we urgently need adequate protective clothing. Otherwise we are lambs to the slaughter,” one doctor wrote in the Daily Mail newspaper.

The chairman of the British Medical Association said the lack of equipment was “totally unacceptable”.

The government says it has shipped 7.5 million pieces of PPE in the last 24 hours.

Hopson of NHS Providers said an “unprecedented” staff absence rate of 30 to 50 percent in some places was exacerbating the crisis in London while there was also a “real problem” with ventilator capacity.

The NHS has access to some 8,000 ventilators and the government has ordered 8,000 more. Johnson’s spokesman said they were expected to arrive in the coming weeks and months.

But Imperial College epidemiology professor Neil Ferguson, a government scientific advisor, has said most would be needed “in approximately two to three weeks” time as demand peaked.

Entrepreneur James Dyson said the government had ordered 10,000 ventilators from his firm but Downing Street said that depended on the machines passing safety and regulatory checks.

Opposition political parties meanwhile criticised the government for not taking part in a European Union scheme to increase the number of ventilators.

But Johnson’s spokesman told reporters: “We are no longer members of the EU… This is an area where we’re making our own efforts.” 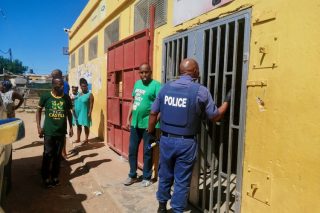 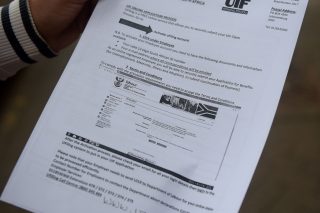 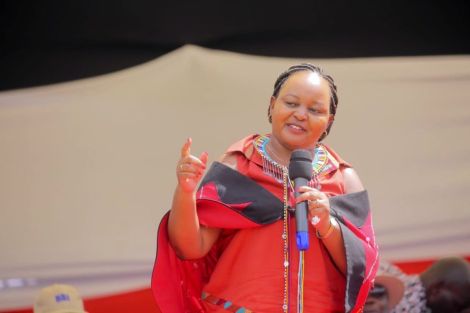 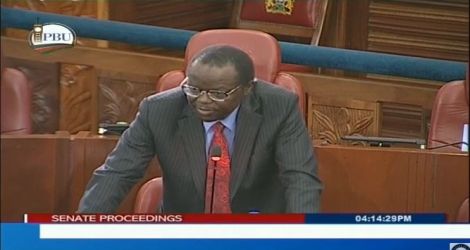